The annual budget setting meeting on February 9th decided the budget changes and the council tax increase for the coming fiscal year 2021-2022.    The preparatory work had been going on in various committees for several weeks.

The majority group inevitably wins the final vote and the opposition groups propose their alternatives with little hope of getting them accepted. It is, however, an occasion for airing different views and for ‘grand-standing’ as the Committee chairs have the opportunity to report on what a great job they have been doing! There were many speeches of congratulation and thanks to CCC staff for their resilience in the Covid crisis.

The scope for radical new ideas is very limited: most of the CCC budget is already committed to essential statutory services such as adult social care, looked after children as well as highway maintenance.

This year’s budgetary process has been overshadowed, inevitably, by the Covid pandemic which has required much flexibility from council employees, with extra costs, partially offset by extra grants from central government.

In terms of the council tax increase, this will be 1.99% for general expenditure and 1% for Adult Social care so the County Council component of your tax bill for next year will be:

For people living in the Band D benchmark house, the increase amounts to £40.59 per year, or £3.38 per month. County council tax accounts for 70% of our overall council tax bill, the rest being levied by Fire, Police, District Council and Parish Council.

The new investments for the coming year are an extra £4m. on Footpaths and Pavements, £170k on saving the B1050 (which is in danger of collapsing) and £1.090k on flood attenuation and biodiversity. Funding will need to be transferred from reserves to balance the budget.

The Liberal Democrat alternative for 21-22 (1.99% plus 1.5% for Adult Social Care) would have added a further monthly charge of £0.57p for a Band D household, above the Conservative proposal. The Lib Dem improvement schemes included £600k for Community Support Hubs, £200k for Green apprenticeships and small businesses, £40k for Junior Travel Ambassadors and capital investment in energy-saving measures, road improvement and in enhancing and increasing biodiversity, with a revenue implication of £51k. In addition, they proposed to save £105k by streamlining council committees and reducing the Special Responsibility Allowances for councillors.

The Labour alternative was for a 2% rise for Adult Social Care and 1% for general expenditure with a withdrawal of £13M from the Transformation Fund, and spending of £700k for the Innovate and Cultivate Fund, £4,393k for a Covid Recovery Fund, £100k for the Bikeability Scheme, £1m contingency fund for help with return to school and £300k extra investment in adult social care. Plus £7k to ensure that all CCC employees receive as a minimum the  ‘Real Living Wage’.

Huntingdon District councillor Mike Humphrey says: "I have been aware for sometime that there are ongoing problems with dog poo on the football pitches on Sapley Park with teams forced to walk the pitches to collect mess before matches.

"A cursory walk around the area (approx 4 acres) shows much of the problem is due to a single old green dog bin which is clearly insufficient.

"I realise there are many pressing matters but these matters impinge on public health, exercise and community wellbeing. So could we at lest push for these bins to be considered under 2021 budgets?"

The Huntingdonshire Lib Dems normally hold a Saturday morning 'surgery' on the last Saturday of each month from 11.30 to 12.30 in the Market Place, Huntingdon. Typically, there are Town, District and County Councillors to help people with their enquiries.

Due to the Coronavirus crisis, we won’t be able to hold our surgery this month.  But if you have any enquiries we can help you with, please contact us via our Facebook page:  https://www.facebook.com/HuntsLibDems/ 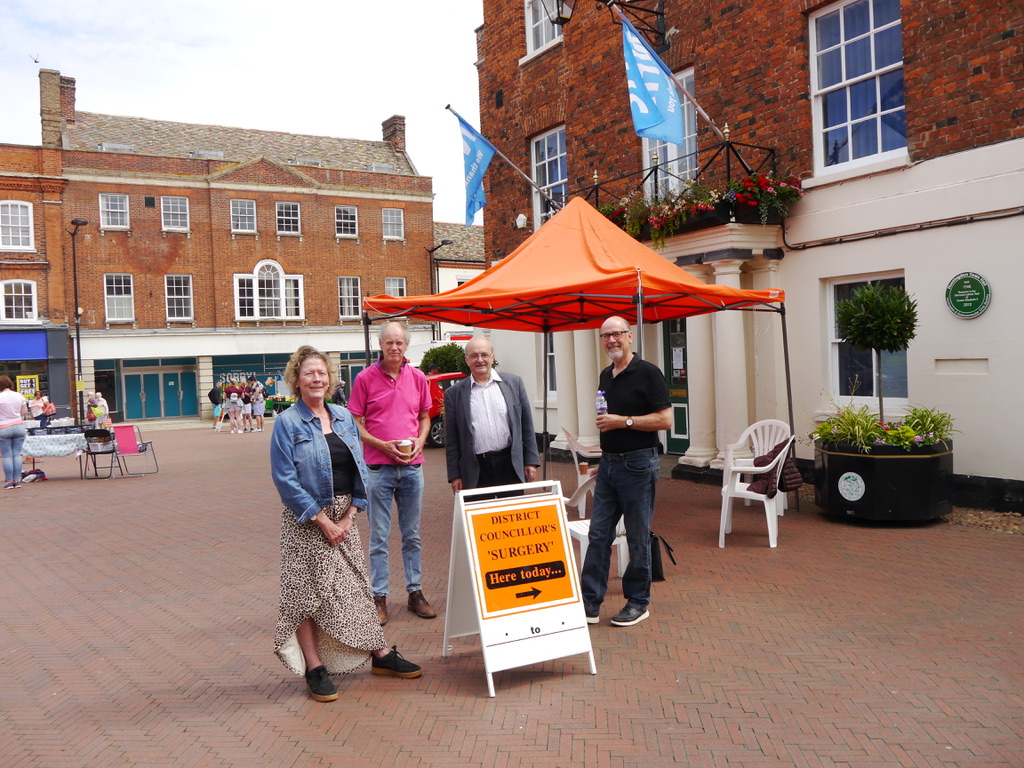 The Liberal Democrats have announced two major policy initiatives designed to help with wealth inequality. One is to make available £10,000 over a person’s working life for training. The other is to pay for 35 hours of free child care per week for children once they reach nine months of age. Both are highly-targeted. Both are likely to make big differences.

Both Labour and the Conservatives have been making big promises, as if they have suddenly found the proverbial “magic money tree”. That would be rash at the best of times, and is doubly so when we are facing real strains over climate change, and self-inflicted ones if Brexit happens.

But there are real problems of wealth inequality in our society. These policies --- like pushing the Tories to agree to an increase in the basic tax allowance to £10,000 when we were in coalition --- are highly-targeted ones to reach real bite points.

For people with access to money, childcare is practical, and training can happen when needed. But for many others, having a child means a parent drops out of work, because they are not earning more than the cost of child care, and then struggle to re-enter work. This is a particularly serious concern because there’s a lot of evidence that people who spend their first five years in poverty are much more likely to face poverty for the rest of their life. Early intervention can make a huge difference.

In a world that is rapidly changing, people without the money to pay for further training easily find themselves trapped in dead-end jobs or out of work. This is a crippling inequality. A little money to help with the cost of training is a way out of this.

Both of these policies hold the promise of making a big difference. They are also likely to pay for themselves because they are likely to lead to people earning more (and being able to pay more tax). They are examples of policies targeted to make a big difference to people’s life chances, without imposing an unrealistic burden on public finance.

A Snapshot of support for the Liberal Democrats

Recently I was out in St Ives, making a video for use on Facebook. A total stranger interrupted to say how glad he was to see me out campaigning. He explained that he’s always voted Conservative, but is appalled at the way things have been going around Brexit, the lack of support from Mr Djanogly our local MP and the behaviour of the Conservative party recently. He said he would be voting Liberal Democrat, for the first time in his life.

Canvassing recently in St Neots, a grand total of two people told me they were planning to vote Conservative.

These are both signs of a huge change going on, as both the Conservatives and Labour leap to extremes. They’re a sign of growing support for Liberal Democrats as a credible alternative --- and the prospect of Huntingdon Constituency returning a Liberal Democrat MP in December.

Margaret Thatcher was one of the first major political leaders to recognise the seriousness of climate change. She’d had a scientific education, saw the science and tried to act on it. That was a long time ago.

Since then CO2 levels have gone up, we’ve had a succession of “hottest summers on record”, “unprecedented flooding” and major forest fires.

Coalition a decade on

In the mean time key Liberal Democrat achievements like pushing up the point where people start to pay income tax to £10,000, equal marriage and helping disadvantaged children with the Pupil Premium tend to get overlooked because they clearly work and have come to be seen as mainstream (even though it was an uphill battle to get them accepted). Forming the Green Investment Bank was a Liberal Democrat achievement, which has dipped below since it was sold by the Tories. This is one of a number of things where the harshness of the Conservative regime since the coalition gives an insight into the moderating influence of Liberal Democrats.