The Liberal Democrats are standing 4 very strong candidates in St Ives this year, who, we believe, will be outstanding representatives for the people of the town. 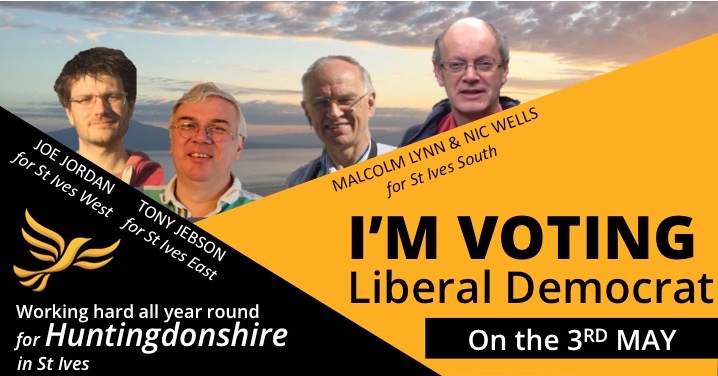 In St Ives South we have 2 great, experienced candidates:-

Malcolm Lynn has lived in Huntingdonshire for the last five years, having moved into the area from East Yorkshire, where he was Chairman of the Beverley and Holderness Liberal Democrats and was also a leading member of a successful cross-party campaign to stop the construction of a waste incinerator on the outskirts of Hull. He is currently the Treasurer of the Huntingdonshire Liberal Democrats. In Huntingdonshire, he has actively campaigned for Britain to remain in the EU. He is concerned that Brexit would be a historic mistake that would damage Britain’s standing in the world and the prospects for our future prosperity and especially the prospects for young people.

Nic Wells has lived in Huntingdonshire for 30 years and over that time he has served on town and parish councils. Nic and his wife live in the centre of the wonderful market town of St Ives. He is seeking election to Huntingdonshire District Council as he believes that his experience, commitment and passion would be beneficial to the good governance of our District. He is very concerned about homelessness in the district and also keen to see further improvements in recycling levels and waste management.

Tony Jebson is our candidate for St Ives East. Tony is 57 and has lived in the area for almost 11 years. He is a successful electronics engineer and worked in the US and Finland before moving to Cambridgeshire, where he designs processors for networking equipment and mobile phones. His interests include rugby, Anglo-Saxon history, and astronomy. He has previously served on the local Parish Council and has a strong interest in science and technology policy, which is critical to the Cambridgeshire economy.

Our candidate for St Ives West is Joe Jordan. Joe has been an excellent addition to the Lib Dem team having moved to Huntingdonshire in 2016 working as a software engineer in the area. Joe Jordan has been a Lib Dem for over eleven years, and has stood in Council and Parliamentary elections previously. Joe has been active within the District working with Mike Shellens and the Focus teams in Huntingdonshire on issues like parking and traffic etc. and would make a fantastic councillor for this ward.

Its time to take a positive change for St Ives. Our quartet of candidates will make a really positive difference for the town.

VOTE LIBERAL DEMOCRAT IN ST IVES ON 3rd MAY