We have 5 outstanding candidates in this year's local elections in St Neots. These guys already work incredibly hard for you, even when they are not councillors. Imagine the difference they will make if you make them YOUR councillor!! 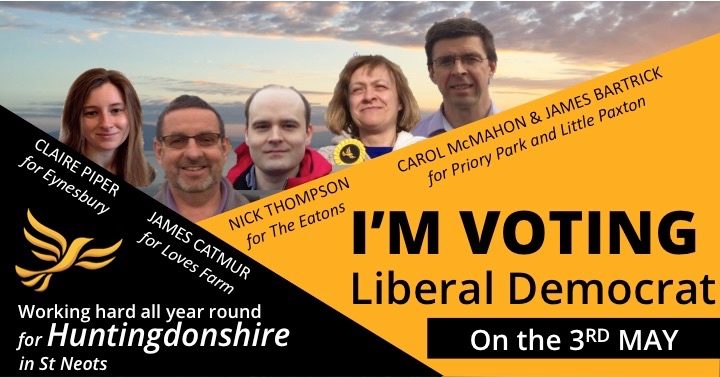 In Priory Park we have CAROL McMAHON and JAMES BARTRICK standing as candidates:-

Carol and her family moved to St Neots in 1997 when her husband’s job was relocated to the area. Both their sons went to Longsands Academy. Claire has worked at both Priory Junior and Priory Infant Schools as a Lunchtime Supervisor. She has been a Liberal/Lib Dem all her adult life and joined the Party in June, 2016. Claire is active campaigning on local issues in Little Paxton and St Neots, where she feels that the opinions and wishes of local residents are often ignored by the local council. If elected she will ensure that local residents have their views on local issues taken into account by the District Council.

James is a life-time Lib Dem who has stood for election before in both Priory and Little Paxton wards. James works in London for a US bank and was previously elected as a Councillor in the London Borough of Harrow.

JAMES CATMUR is the Liberal Democrat candidate in Loves Farm. James has lived in Great Gransden since 1997. He has supported the Liberal Democrats ever since he was able to vote and joined the party following the referendum and decided he wanted to try and get elected as a County Councillor when his wife died in November 2016 from Motor Neurone disease. This experience has given James first hand knowledge of what works well or badly within the NHS and the health care system James works in the transport sector with knowledge of both highways and railway. His knowledge and experience will be very important,as the A428 and plans for the Cambridge-Oxford road/rail links move forward and potentially affect us all.

NICK THOMPSON is our candidates in The Eatons. Nick has lived in St Neots for 10 years working as the lead developer for a software company in the HR & Payroll sector based in Hitchin. He is a strong supporter of civil liberties and joined the Liberal Democrats a year ago after becoming concerned at the approach being taken by successive Labour and Conservative governments. In his spare time I enjoy both the outdoors especially skiing, hiking and camping, as well as a relaxed evening in playing video games or catching up on recent news.

Finally, and very importantly CLAIRE PIPER is your Liberal Democrat candidate in Eynesbury. Claire moved to St Neots in 2012 and works in Huntingdon, in the water industry. She chose to make her home in St Neots for its great transport links and excellent local facilities. Claire joined the Liberal Democrats in 2016 and wants to be a councillor for all residents, and especially, to represent the young families and professionals that have little-to-none representation in our current council.

Nobody works harder for the residents of St Neots than your local Liberal Democrat team.

Make a change for the better. Vote LIBERAL DEMOCRAT on 3rd MAY