We have three capable candidates standing for the three seats that cover St Ives, Wyton, Needingworth, The Hemingfords and Fenstanton. We also have four great candidates for seats in NW Cambridgeshire; Ramsey & Bury, Sawtry & Stilton, Somersham & Earith, and  Warboys & The Stukeleys. 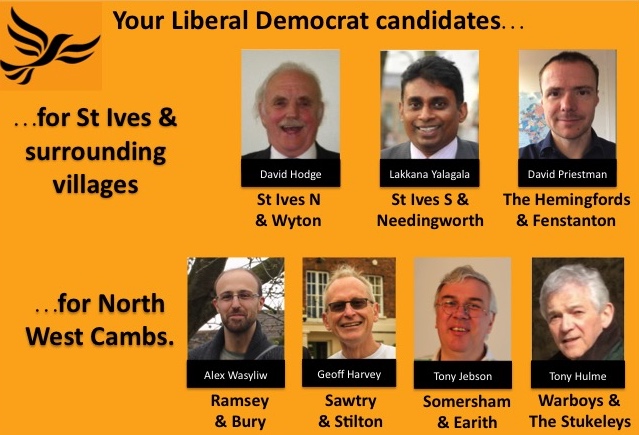 We give a short introduction to all our candidates below. As you will read, we are really fortunate with the quality of candidates that have put themselves forwards for election. As you will be aware, the General Election is about six weeks away, but the County Council election on 4th May is a wonderful opportunity to make an important statement of intent! So, vote Liberal Democrat for a brighter future!

David has lived in St Ives for over 40 years. He is married and has a daughter, who grew up in the town attending Thorndown and St Ivo schools, and now also has three lovely grandchildren.

David has had the honour of serving St Ives as Town Mayor on three occasions, during his time as a Town Councillor. He was also governor of Thorndown School and Chair of Governors for approximately ten years. Together with other members of my party, one of the things that he was most proud of was the long, hard campaign they won to save the Corn Exchange from closure.

Outside politics, David was Chair of the St Ives Carnival and Music Festival Committee for the last three years and is still actively involved. He is a board member of SITI (St Ives Town Centre Initiative).

Lakkana has lived in Huntingdon for over six years now. As a graduate telecommunications engineer, he worked in a number of countries before settling in Huntingdonshire.

Lakkana joined the Liberal Democrats because of the party’s values and its reputation for listening to people and working for the electorate all year round, not just at election time. With a reputation for hard workand energy, he will make an excellent councillor for St Ives South and Needingworth

David Priestman: Our candidate for The Hemingfords & Fenstanton

David lives in Hemingford Grey with his young family and has run a successful publishing business in Cambridgeshire for 20 years.

He has now lived in our ward for 5 years. Before moving to Hemingford Grey, he represented the Huntingdon East Ward as a Councillor on the Huntingdonshire District Council from 2006 to 2010.

His political interests include housing, planning, environmental issues, transport, education and business. David has the experience and a reputation for hard work and energy, which will enable him to become an excellent councillor for our ward.

Born in Norwich in 1979, Alex studied in Leicester and now works as an architect in Cambridgeshire. As an architect, Alex believes that it is really important to build good places where people want to live, and understands how this contributes to the health and mental well-being of those who live there.

Alex is proud to be a good old Norfolk boy, proud to be an East Anglian, proud to be English and British and, yes, proud to be a European too! He campaigned hard against Brexit, and still believes it will be bad for the UK overall. He also finds it worrying to see so many of our politicians blind to the challenges and difficulties ahead.

Alex believes that it is the people that make the community, and there is an important role a councilor should play in supporting these communities. For too long our council has tried to see problems as independent from communities and people - sometimes to even see them ‘as’ part of the problems. It’s time for a change, it’s time to put people back at the heart of politics.

Geoff is 58 and was born in Upminster in Essex in 1959. He is married to a GP and has four children Geoff attended Cambridge University where he studied engineering and lived in Cambridge for 15 years. He has worked as an electronics engineer in the high-sector in Cambridge since university and most recently was joint owner and Chief Technical Officer of a company developing low power solutions for silicon devices.

Geoff has always voted Liberal / Liberal Democrat but finally joined up on 24th June, after the referendum. He is a passionate pro-European.

Tony is 57 and has lived in Somersham for almost 11 years.  He is a successful electronics engineer and worked in the US and Finland before moving to Cambridgeshire, where he designs processors for networking equipment and mobile phones. His interests include rugby, Anglo-Saxon history, and astronomy.

He has previously served on the local Parish Council and has a strong interest in science and technology policy, which is critical to the Cambridgeshire economy.

Tony Hulme: Our candidate for Warboys & The Stukeleys

For many years, Tony has subscribed to the “liberal tradition” and to its reputation for listening to people and working for the electorate all year round, not just at election time.

Some of our candidates have already published their election addresses and outlined our priorities and addressed some key current issues in a series of newsletters.