Your Liberal Democrat candidates for Huntingdon, Godmanchester and surrounding villages

Huntingdon and Godmanchester already have two very fine County Councillors and in this election we want to increase this number to three! Your current councillors, Mike Shellens and Graham Wilson work tirelessly on your behalf, spending lots of time listening to residents concerns and representing your interests. Together with Peter Downes our candidate for the Buckden and Brampton division (introduced in a previous post), they represent a formidable force for good on the County Council.

For this election we have a new candidate in Huntingdon, Joe Jordan, who has recently moved into the area, has stood to be elected as a councillor previously too! We also have Mike Baker (also introduced in a previous post), who has extensive District Council experience. 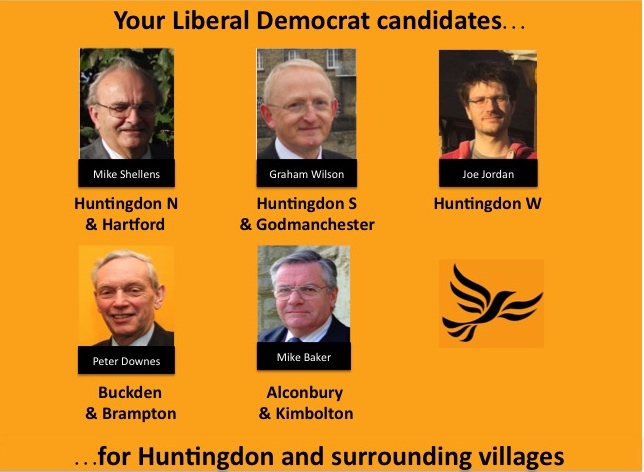 We are really fortunate that we have so many quality candidates, so Vote Liberal Democrat and make a difference!

Raised in Plymouth (and hoping Argyle are promoted this year), I married in 1969 and have two daughters, and four grandchildren. My career has spanned roles in both he public and private sector, which has given me valuable knowledge and skills for my work as a councillor.

I joined the parish council in 2000 and following the unexpected death of the Chairman I took on that role and stayed in it for 3 years. Since 2004 my involvement with the Lib Dems has grown, In 2013 I became a County Councillor, where I have been the Chair of Audit and Accounts for 4 years and on the Fire Authority, then the Police and Crime Panel, plus a short period as a member of the Luminus Homes Board.

Outside politics I am Treasurer of Fusion, a holiday scheme for children on the Oxmoor, I am also a member of the Huntingdon Freemen’s Trust.

See my latest newsletter HERE. My election address will be published shortly.

Graham Wilson: Our candidate for Huntingdon South and Godmanchester

I have been a county councillor for Godmanchester and Huntingdon East since 2009 and work hard to represent all my constituents. In the eight years as councillor I have built up significant experience including:-

I am married with two children, two grandchildren and one dog. My professional background is as a chartered engineer with expertise in town planning and running major projects. In my spare time I am a keen gardener, and recently I have taken on an allotment.

Joe Jordan has been a Lib Dem for over ten years, and has stood in Council and Parliamentary elections. He moved to Huntingdon last summer, and has been working with Mike Shellens and the focus team on issues like parking and traffic. He works as a software engineer in London during the week.