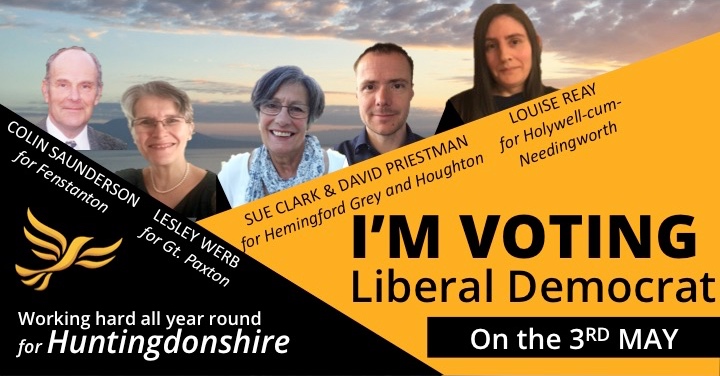 Lesley Werb is our candidate in Gt Paxton. She has lived in the area for 32 years, an ex WRAF officer - short-service commission, a retired teacher, and happily married for 42 years with 5 children and 13 grandchildren. She enjoy family life, walking, birdwatching, reading and volunteering locally as I believe in giving back to the community we live within. This has included in the past being: a parent governor for 4 years at the children’s secondary school, fund raising, tennis coaching locally, and being a weekend Information Warden at the Local Nature Reserve for 5 years. Lesley currently is the Safeguarding Officer for her local Benefice of 4 Churches and supports some local primary schools with Peer Mediation and Restorative Approaches training.

Colin Saunderson is standing in Fenstanton. Colin has been a great servant to the community and was a District Councilor between 2010 and 2011 and has been an ACTIVE parish councilor since the

Louise Reay is our candidate in Holywell-cum-Needingworth. Louise has lived in Earith since 2008 and is a mother to two children, who both attend Earith School. She worked in the IT industry and then customer services before deciding to become a stay-at-home parent while at the same time studying at the Open University. She has just graduated with a BSc Open degree specialising in software development. In her spare time she’s fond of cycling, the countryside and computer/board gaming.

In Hemingford Grey and Houghton we have two superb candidates:-

Sue Clark and her husband have lived in Huntingdonshire for the past ten years. She has three children and seven grandchildren. Sue returned to study as a mature student and qualified as a Social Worker in 1990, working in hospitals and with adults who have physical disabilities before she retired two years ago. She is a volunteer with two local organisations and her hobbies include current affairs, local history, walking and gardening Although taking an interest in politics for many years, Sue joined the Liberal Democrat Party after the 2015 General Election since when she has actively supported the Huntingdonshire Lib Dems.

David Priestman lives in Hemingford Grey with his young family and has run a successful publishing business in Cambridgeshire for 20 years. He has now lived in our ward for 6 years. Before moving to Hemingford Grey, he represented the Huntingdon East Ward as a Councillor on the Huntingdonshire District Council from 2006 to 2010. His political interests include housing, planning, environmental issues, transport, education and business. David has the experience and a reputation for hard work and energy, which will enable him to become an excellent councillor for our ward.

We are very happy with the quality of candidates we are standing in this election who, we know, will do a great job for the residents. Make a positive change for the future.

VOTE LIBERAL DEMOCRAT ON 3rd MAY