Your Liberal Democrat candidates standing up for Godmanchester and Hemingford Abbots 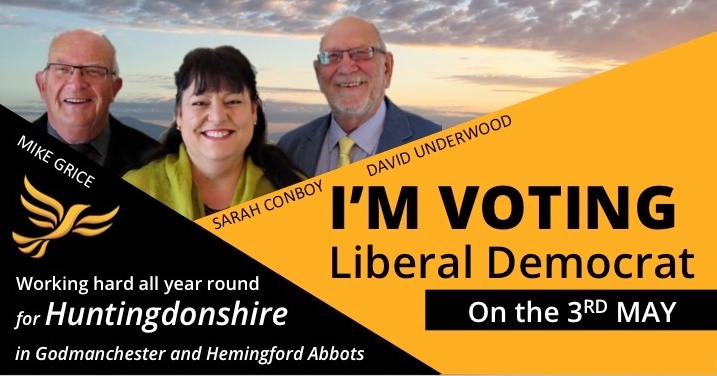 We have three wonderful candidates for the Godmanchester and Hemingford Abbots ward, which also, importantly, includes Offord Darcy and Offord Cluny too! Sarah Conboy and David Underwood will be familiar to many as they have been District Councillors in the area for a number of years. Mike Grice is a new candidate in this elections but he brings with him a wealth of experience!

For those of you who do not know them already:-

David has represented Godmanchester on the District Council for the past two years, sitting on Economy and Growth Overview and Scrutiny Panel and Hinchingbrooke Park Management Committee He is currently Town Councillor and former Mayor of Godmanchester for three years. He developed and administers the well-used Godmanchester Living Facebook Group. David is the Chair of Disability Huntingdonshire, a charity covering the entire district, supporting those with disabilities particularly over benefit issues. He trained as a Dementia Friends Champion, and is part of the team working to make Godmanchester a Dementia Friendly Community

Mike has lived in Godmanchester for over 16 years. A former policeman in Essex he ran his own successful financial services company for over 20 years Mike is the Chair of local WEA group. He hosts a popular show on local radio and is well known for organising the Godmanchester Town Show and involvement in many local groups

Sarah, David and Mike have been very busy out campaigning and even have their own FaceBook page which you can find HERE. They will be great councillors for this ward so make sure you vote Liberal Democrat on 3rd May.