A People's Vote is getting closer. Are you ready? 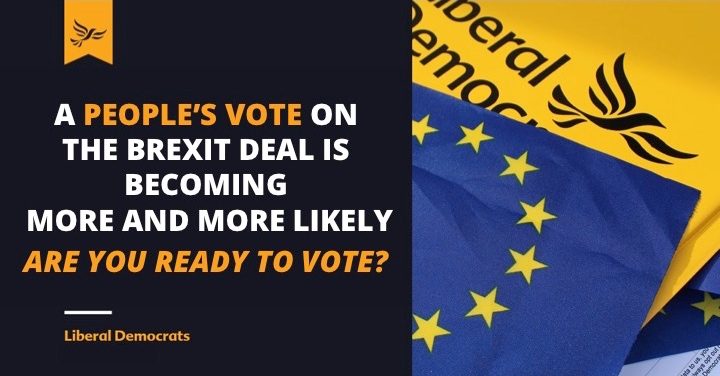 Since the referendum in 2016, the Brexit realities have become more and more stark. An increasing number of voters (by the latest polls a significant majority) believe that the costs of Brexit are too high versus the supposed benefits.

Whilst the government insist, at this point, that there will not be a second referendum, as the demand of the British people to have the final say on the deal grows ever stronger, it will become harder and harder for them to resist.  The people want to take the final decision on whether our country remains in the EU, or we leave the EU; either on the terms the government negotiates or crash out with no deal.

We do not know when the British people will get the final say on Brexit, but it is clear that it is getting ever closer.  To be prepared, we need to mobilise now to make sure that ALL voters are able to participate in this critical decision.

If you are reading this, and are not registered to vote, then sign up as soon as you can. Encourage, and help those around you to register as well, especially younger people. Since the last referendum there is a new cohort of voters who where 16 at the time and are now able to have their say. If you live overseas, many of you can also vote (if rules are the same as last time), and it is important that your voice is heard too. Make sure you are registered in good time!

The Your Vote Matters Website (https://www.yourvotematters.co.uk) provides good information on voter registration and who can vote in which election. It currently does not have any information on referendums as there are none scheduled yet, but that will, of course, change as and when a referendum on the final Brexit deal is put in place.