Liberal Democrats: working tirelessly for the people of St Neots and surrounding villages

Since the 2015 General Election we have seen a major resurgence in our party in St Neots. Over the last two years the number of people joining the party in St Neots has been significant, and this growth continues, just as it has nationally!

With a solid base of active members in the town and surrounding villages we have been increasingly active over 2 years, fighting many campaigns on behalf of local residents, despite the fact that we have had no councillors in that time.

Now we want to take the next step and represent the people as County and District Councillors. We have candidates standing in each of the seats and they have been getting positive feedback on the doorstep. Our party leader has even been here to help deliver our newletters! So now is the time to vote for a better future. Vote Liberal Democrat and make a difference! 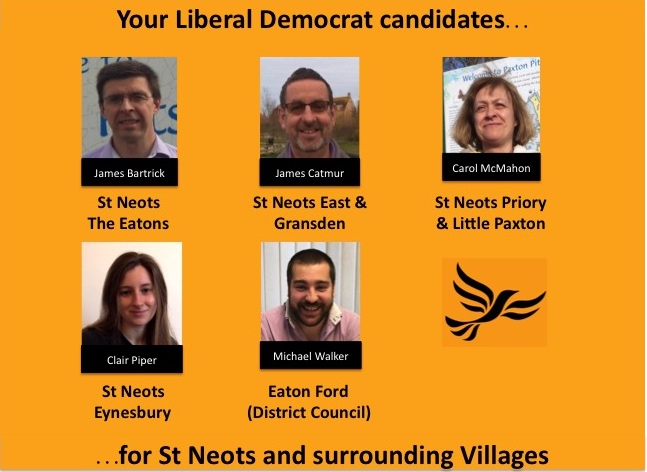 Carol moved to St Neots in 1997. A life long Liberal Democrat, she joined the party after the Brexit referendum as she felt that she needed to help form the type of country she wants to live in. After campaigning on local issues over the last 2 years Carol feel that the opinions and wishes of local residents are ignored by Local Councils. Local people should have a say on what happens and their elected County Councillor should listen to them and act on their behalf. So if you want your voice heard again vote for Carol!

James Catmur: Our candidate for St Neots East and Gransden

James has lived in Great Gransden since 1997. He has supported the Liberal Democrats ever since he was able to vote and joined the party following the referendum and decided he wanted to try and get elected as a County Councillor when his wife died in November 2016 from Motor Neurone disease. This experience has given James first hand knowledge of what works well or badly within the NHS and the health care system

James works in the transport sector with knowledge of both highways and railway. His knowledge and experience will be very important ,as plans for the A428 and Cambridge-Oxford road/rail links move forward and potentially affect us all.

Claire moved to St Neots in 2012 having been bought up in Leicestershire, and studying in East Anglia. Claire works in Huntingdon, in the water industry and chose to make her home in St Neots for its great transport links and excellent local facilities.

Claire joined the Liberal Democrats after the Brexit referendum because she was horrified at the divisive campaign, dishonesty and mistrust of experts. Claire is saddened that people from EU countries living in our country may now feel unwelcome, despite making valuable contributions to our communities. Claire wants to be a councillor for all residents, but in particularly wants to represent the young families and professionals that have little-to-none representation in our current council.

James Bartrick: Our candidate for St Neots The Eatons

James moved to St Neots in 2003 and has been a Liberal/Liberal Democrat member since 1985. James has served 4 years as a Councillor in London Borough of Harrow and is currently the Organiser of St Neots Liberal Democrats.

James works in London as an IT Manager and has been campaigning for the station to reduce its parking fees and to reduce parking problems in local residential roads.

James view is that we have to go back to the politics which made the Liberal Democrats a force. We need to concentrate on the local issues which affect local people.

Michael Walker: Our candidate for the District Council election in Eaton Ford

Michael was born in Bedfordshire and moved to St Neots in 2015 and joined the Liberal Democrats after the Brexit referendum. Michael works as a teacher, in a secondary school, teaching drama, politics and religious studies.

Michael became politically active last year due to the shift towards the right and believed there is a need for a strong and united opposition to the government. This opposition should be the Liberal Democrats!

Michael’s vision for the country is a free society, where we are all able to reach our potential and provide a helping hand for those in need. For this to happen we need a compassionate, caring and positive outlook.

All our candidates have published their election addresses and outlined our priorities and addressed some key current issues in a series of newsletters. Click HERE to see these compiled in one document!