“I want my country back” says Lib Dem Baroness.

Speaking at Huntingdon Liberal Democrats’ Annual Dinner last Friday, Julie Smith (Baroness Smith of Newnham) told local party members that while respecting the result of the EU referendum in June Liberal Democrats would not stop fighting for the best possible deal for the UK.

“Part of the Leavers’ case for Brexit had been the desire to “take back our democracy”, which most obviously is the House of Commons, with democratically elected MPs representing everyone in the UK.  Many Leavers had argued for parliamentary sovereignty but some of them now apparently did not want our parliament to do the job that MPs were elected to do.  It would be wrong to re-run the referendum but there should be parliamentary engagement and people should be able to have a say on the final deal.  We are living in interesting times and we want some guarantees on what the government is looking for in the negotiations”, she said.

In answers to questions, Baroness Smith said that she was worried about the increasing divisions in society, the intolerance of some newspapers and the lack of respect for the British Constitution which had become apparent since the referendum.  “To coin a phrase, I want my country back”. 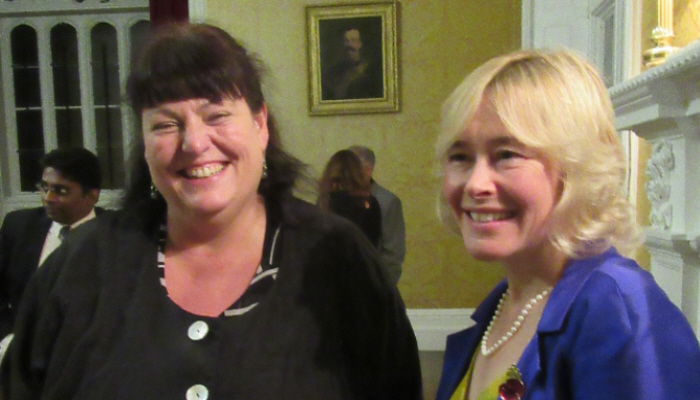 The dinner was held in the magnificent Assembly Room at Hinchingbrooke House.  In thanking Baroness Smith, Councillor Sarah Conboy, the Chair of the Local Party, said that the local party was looking forward to busy year ahead and more successes in the County Council elections.